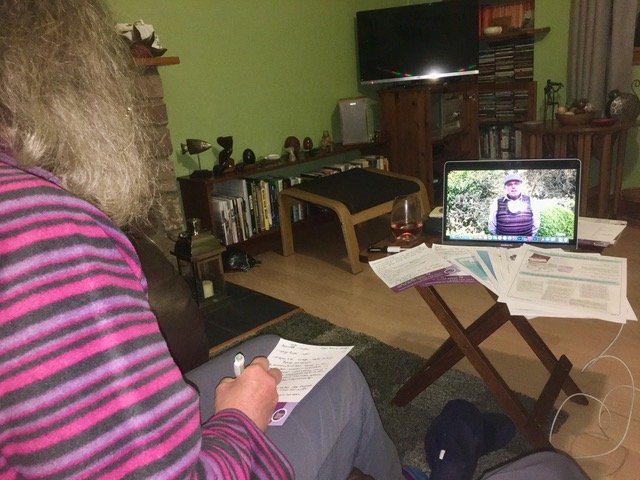 OK, I know how it is supposed to be.

This is an online murder mystery game: you watch the videos (the videos I shot right here, where I am now), you download and print off (or display on your screen) the clue pack and the various photographs, newspaper cuttings, etc.

Then you solve (or, in the case of the picture above, don’t) the case.

But it is still a thrill to see it in action.

Not murder, as such. Obviously. Not even a murder mystery dinner party, judging from the photo. But the fact that it is all there, me playing Rufus Walker, the clue pack I spent days on, in INVERNESS!

OK, Inverness isn’t the end of the earth. It’s only about 600 or so miles away (and I know it has been played in Italy and Oman) but it still strikes me, as someone who did all this whilst locked up at home in North London, as rather exciting. I’m probably showing my age here but it seems so incredible to get the clue packs to Inverness, in the north of Scotland, WITHOUT A POSTAGE STAMP!

My thanks to David and Carol (neither of whom I know, nor do I know anyone who knows them – they are complete ‘strangers’ PLAYING MY MYSTERY GAME!)

Thank you, not only for the photographs but also the permission to let me put them one my site. 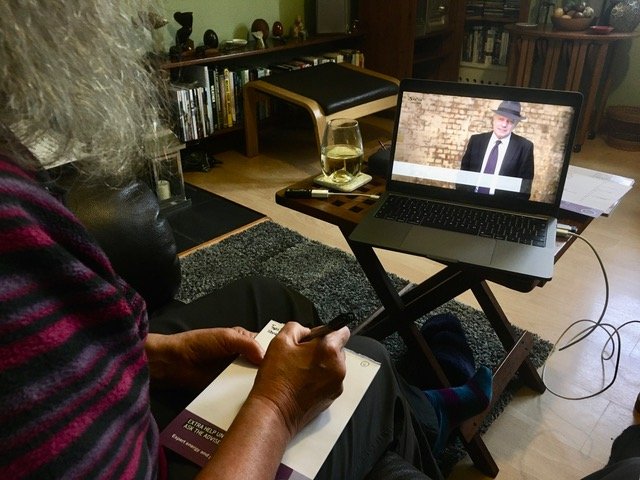 Having run corporate murder mystery games (or ‘Team Building’ as the corporations prefer to call them) for 30 years, I am used to a ‘sense of occasion’.

Guests don’t dress up as much as they did in the olden days (the 1990’s). Casual is the new formal. But there is still a sense of theatricality to the evening, wherever that may be. Most of the venues we played (and still, sometimes, play) are five star hotels, castles, stately homes. We’ve played some very posh places. But we have also played in smaller restaurants, private houses, even narrow boats.

I don’t want this to be taken the wrong way (especially by Carol) but I think the thrill, for me, is that here we have someone solving the murder mystery, casually dressed (even without her shoes) in their very own living room.

It’s the difference between working in theatre and television. The fact that you DON’T SHARE the experience with your audience, that’s what is remarkable.

Although I did work in TV and film, most of my acting career was in the theatre. And whilst we’ve played our murder mystery shows and corporate events to audiences from 8 to 2,000 people (on stage with a giant screen beside us), this remoteness is completely new to me.

I know that some players (because they have told me) have turned the game into a bit of a party, along with fancy dress. I don’t quite know what they are dressed as as it is set in the present day (perhaps they have dressed as esteemed  residents of Hopton St. Mary). You could even play this murder mystery without clothes at all if you wanted (not sure I should put those photographs on these pages).

But I love the fact that this is being played in locations I have never even been to. I’d love to see more pictures like this; be it your murder mystery dinner party, online game or even if you are watching it on your phone.

So please get in touch. I’d love to know how you played (assuming you did play) and I’d love pictures from your party.

Carol got it wrong.

Again, I don’t wish to embarrass Carol. Dave said they really enjoyed playing it – and you can see how many notes she’s taking – but (sorry Carol) he said she didn’t quite get it right.

Not to worry. There have been some fantastical conclusions – you’re not alone, Carol – I love the way people, once they have gone in the wrong direction, keep following it.

I don’t know the percentage but a fair few have got it right. I love a balance of about 20% correct, 80% wildly out.

So why not download the paperwork and try your hand at solving it yourself. Reckon you’re up to it?