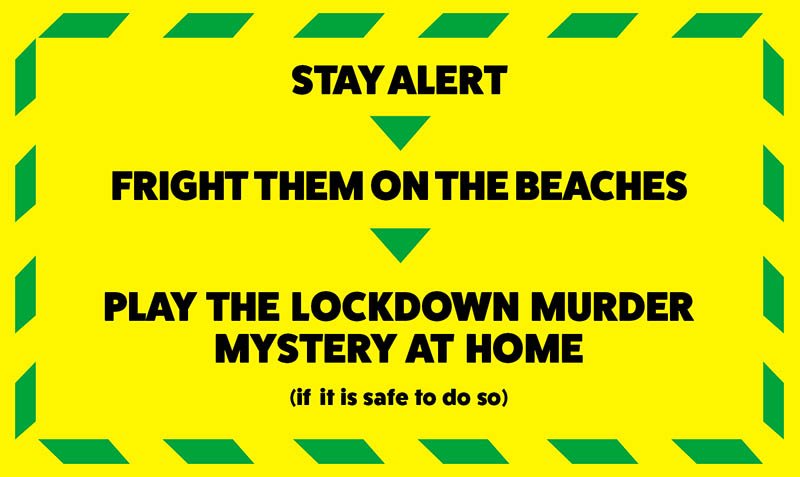 This is a murder mystery game. It is meant to be a bit of fun and, I am learning, is played almost exclusively at weekends (though it’s hard to differentiate the days of the week during lockdown).

So any major changes I make to this site (and by ‘major’ I mean any change) will take place on a Monday morning or the middle of the night. The sort of times when people tend not to be playing.

Having trained at RADA, I wasn’t phased by the acting, I started a murder mystery company in 1990, so I’m too worried about the story. I have been filming all of my life (still have my Braun Nizo Super-8 camera here somewhere), working professionally at that for a decade or so. I’ve been editing (Non Linear) for almost twenty years, so none of that concerned me much. I’ve even built a few websites in my time and, whilst I consider myself near the novice end of the spectrum, I expect to be ‘intermediate’ in as little as…30 years or so.

But the publicity… I’ve said it before, publicity is NOT my forte.

The big news story at the moment, here in the UK (there I go again, pretending my customers are all over the world) is that Dominic Cummings who, for those who don’t know, is the controversial senior advisor to the Prime Minister, BROKE LOCKDOWN RULES!

Right at the start of the lockdown, at the end of March (about the time I was dressed as Natalie Longbottom), in the same week that both Boris Johnson and Mrs Cummings were diagnosed with COVID-19, the Cummings family drove 260 miles to the north of England (at the time, pretty much virus free) to drop their four year old son with his elderly parents. Both the Cummings then suffered from the virus for a couple of weeks before driving back to London.

A major political controversy just at the time I am opening my eyes to the game of advertising and self-promotion.

My first instinct was to put a photo of Dominic Cummings on my FaceBook page, along with a joke about the lockdown laws NOT applying to the lawmakers. I realised this was politically dangerous.

Then I thought about copyright law. It is easy to find a picture of Cummings, but try finding one that is licensed for reuse. It doesn’t exist (he’s famously secretive) so I started to wonder how so many copyright photos and videos appear on FaceBook. Am I being too sensitive? If everyone flouts the law (like Mr Cummings), should I not too?

I don’t think so. I mean, I’d like to sell enough of my murder mysteries to, at the very least, get back some of the money I spent making it (and something towards the 400 hours). But I don’t think I should promote my site by nicking pictures (albeit freely available pictures).

Then I started to think that I should learn to enjoy promotion.

After all, my murder mystery game should, I hope, provide a bit of fun so maybe I should promote in the same way. I came up with the slogan (above). This is based (though not directly or illegally lifted) on the government’s new easing-of-lockdown rules which are: Stay Alert, Control the Virus, Save Lives.

I rather like ‘Control the Virus’. It puts me in mind of a lion tamer at a circus, controlling not a lion but a virus. How do we control something we can’t see?

In the UK, people are beginning to go back to ‘normal’. ‘Social distancing’ is easy to forget about as crowds start to gather. Road rage is back on the formerly empty streets. The sun is shining, beaches are filling up, people are even talking about jetting away on foreign holidays.

As everyone knows, Boris Johnson’s hero was Sir Winston Churchill (“We shall fight them on the beaches”) so I wanted to play around with that famous speech. I stuck my version of Stay Alert on FaceBook, concerned but unsure of the reaction it might get. Would people think it in bad taste (a lot of people have died from all of this)? Would they get the reference? Would they even care?

At the end of the day, I am starting to learn that what you do is less important than how many people are aware of you doing it.

Just as the government say Dominic Cummings did nothing wrong (in essence, telling us we’re the stupid ones for obeying their laws), I find you can do just about anything and get away with it.

So I’m going to start enjoying this promotion thing. I simply want people to do what the UK public are asking Mr Cummings to do: