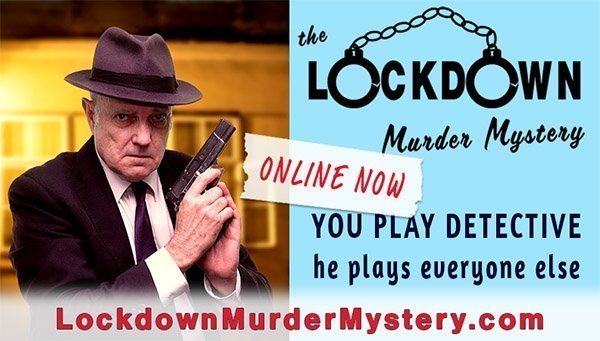 Like a moon mission or infrastructure project, I broke up the creation of this crazy idea into phases.

PHASE THREE (website and clue packs). 15 days (estimate; I didn’t like to think about this phase. I wasn’t even sure if I could do it at all).

This is phase four (promotion) and I don’t like it. Despite what looks like pure narcissism (I’m the only person involved in this entire project; camera, lights, sound, editing, website creation, graphic design, not to mention playing all 12 characters), I’m not very good at saying ‘look at me’. I don’t do Facebook, for example, which is unfortunate because it’s clearly one of the main drivers of the publicity machine. And so now, I crash straight into a Facebook anomaly.

You would think, seeing as they take so many billions of dollars in advertising revenue, that it would be a doddle to place an image onto a FB page with a link directly aimed at your website (or wherever you choose). Not so, and I found out straight away how annoying that was.

A friend of mine (who played the murder videos to his family even before the site was made) kindly offered to place a link on his FB page, and so he did. The problem was that Facebook, not he, selected which image to use, and they chose my white logo on a white background. I asked a few more FB type friends if they would post to their zillions of friends but I didn’t want a white blob as my eye-catching hook. So I started working out how you place an image of YOUR choosing, rather than Facebooks, with a simple hyperlink.

After a couple of days, the link had changed slightly for the better. Instead of the white blob, it was now the clue pack feature picture. But I still couldn’t control it. I have started to wonder if FB choose the picture that features most consistently on one’s site. Hence this post.

You’ll notice my feature image is that of a business-card, an advert; a picture of me with a gun, and as much info as I could put together in a few words. I may even include that image here…

Ah, there you go.

So that’s twice on one page (you may find it on other pages). I am hoping this is the image FB now believes represents my site. In effect, I am trying to fool a massive world player into using a picture that I want them to use. And I need to do that before I send out ‘my link’ again.

But it shouldn’t be like this. If I can build a website (albeit a ‘simple’ WordPress one), I’m darn sure there must be someone at Facebook who knows enough about computers to write the teeny bit of code that would allow millions of people to link their site to a picture of their choosing.

Unless they worry that too many of us will link away from their site forever. Why do I suddenly have the feeling I’m being watched?